So who and what’s in your way of writing? You are! Take a look at this thought-provoking post. 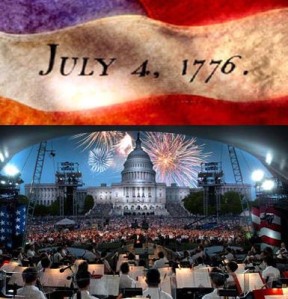 Today is July 4th. It’s hard for me to believe that some Americans don’t realize that July 4th is just a date on calendars worldwide. Today is July 4th in Russia, in Poland, England, Maine, California, and as well in Korea. There’s a July 4th in Tunisia and somewhere in Congo. There’s one Down Under, and all over New Zealand.

Today, is July 4th…but that is not the official or politically correct term… Frankly I don’t like it. Today is Independence Day in the United States of America. On July 4th, 1776, our determined ancestors declared our independence from Great Britain and adopted the Declaration of Independence. And that means a lot to me, and those people who don’t like this country, but live here, should move on. Remember, while a government “thinks” it IS a country…it is the people who make the country. Those who work for it, build it, die for it. Anyone who does not wish to support this country, in my not-so-humble opinion (as most of you know me for) can just get the hell out.

But this blog is not for bashing anti-American imbeciles, it’s for bringing the attention of the American people, our citizens and resident patriots, back to exactly what Independence Day is all about.

Our military personnel worldwide that have put their lives on the line is how our Independence Day has been able to continue for 237 years. Yes, Peeps, 237 years. And if you see a military finest today, you should thank them and shake their hands. You owe that to them. This is NOT July 4th… a day to get drunk, piss off your neighbors and start house and brush fires with illegal firecrackers.

Very few of my neighbors and peers know a lot about “July 4th” or “July Fourth”. How many times I long to here the words Independence Day come through their lips. I long for it!!

Yes, our military has kept these shores safe, and have gone overseas to join in world wars for our sake, or to help out an ally and as we’ve been told, to stamp out oppression.

But why is it we forget those who died in the Revolutionary War? Those families who suffered early on when their husbands and sons did not come home, and they never saw their dead bodies. Let’s face it, without those brave men (as soldiers were only males back then, although I’m sure some women and children died in the midst) we would not have had the opportunity much later to unite the states (Civil War) we now call the United States of America. And by the way, we should remember those Civil War heroes and victims as well.

On this day, let’s not forget who brought us here. Men braver than brave who fought bare footed in the dead of the north-eastern winters. They fought and shed blood right here on this land, fighting and dying for our freedom from the British Crown. Before we cook the kids their grilled hotdogs and fill up the kiddie pool, or run off to the lakefront to look at lovely (and controlled) fireworks displays…before we start drinking alcohol and engaging in family arguments, before we put another steak on the grill and start burning down crap with illegal fireworks, bow your heads for just 5 seconds to thank the souls of those men that started dying back in 1775 at the start of the American Revolutionary War (also called the American War of Independence), today most of us U.S. Americans simply call it the Revolutionary War (1775-1783), that started 238 years ago. These men were outstanding in bravery and their sacrifices need to be recalled and remembered and most importantly…honored.

Without these valiant spirits, dead for well over 200 years, we might still be governed by our mother country. Sure maybe revolution would have come at some point; or maybe it would not have once we allowed ourselves to live under the thumb of some other place. Hey, this happens all over the world. Even the U.S. does it. It did it when we forced the Hawaiian queen to give up her crown. Oh!…Wait, not all Americans know about that. And there are other places that have been conquered too and live under our thumb or the hand over some other superpower nation.

However, we can only speak of our own history, here on our part of the American continent on this day. For when it comes to celebrating a date of independence for any country, the focus should be on their own people and place. And our people started with those who died for revolution. Died for people who would come over 200 years later…People they’d never know.

HAPPY INDEPENDENCE DAY, U.S.A. … My favorite place on the planet.

Please take a look at this video:
http://www.youtube.com/watch?v=HwWi0zdF7wk

For only the rest of today (July 2), can you grab a free copy of my new novel A Jane Austen Daydream on Amazon! Yes, this is the LAST DAY people! Jump to the link! Tell a friend!

On Sunday it was reviewed by the Calico Critic who said:

Daydream is an interesting, entertaining look at a life that Jane could have had. Scott Southard takes her through his own dream for her, holding onto much of the reality of her life, but also offering her possibilities that could only transpire on the pages of a novel. I enjoyed Southard’s choices as a writer, and wish that Jane could have actually experienced them herself. Fans of Austen’s works will enjoy this love letter to Jane, one that both entertains as well as cherishes her as she truly was: An amazing writer and a woman who deeply loved, even if only…

How to Practice The Art of Storytelling